In 2019 the eponymous Josh Bersin, of Bersin by Deloitte, wrote an interesting article summing up developments in what’s come to be know as Full Stack Human Resources. Josh’s article is interesting and covers some good ground, however it’s first and foremost a sales piece seeking to convert readers into paying participants of his learning programs. However, behind Josh’s article is a challenge to the Human Resources landscape that’s become prevalent since Dave Ulrich published his book Human Resource Champions: The Next Agenda for Adding Value and Delivering Results (Google Books), the tendency to specialise rather than generalise.

The Universal Declaration of Human Rights

The Human Resources function has been known by many different terms including personnel management/administration, human resources, people and culture, and people operations to name a few. Regardless of name, the function is always situated in the fulcrum between a Company’s objectives and the people that the Company has access to in order to assist in realising its objectives. The Human Resources function gained purchase following the publication in 1776 of Adam Smith’s An Inquiry into the Nature and Causes of the Wealth of Nations (Project Gutenberg | libro.fm). One of Smith’s key concepts is that a division of labour is essential for the wealth of Nations, and is where the concept of the ‘invisible hand’ of capitalism is introduced. As Companies formed and grew, and as industrial protections, regulations, and legislation were developed, a new specialisation, the “human resources professional”, emerged.

The human resources professional is tasked with two seemingly contradictory goals: to ensure that the Company has access to sufficient labour, of the right quality, to achieve its objectives; and to ensure the industrial protections and ethical treatment of this labour. As Companies developed over time this dichotomy became an issue, which led to the often wide-spread exploitation of workers, and was the catalyst for Karl Marx and Friedrich Engels discussing the exploitation of the working class in their Communist Manifesto (Project Gutenberg | libro.fm). After the end of the Second World War the Universal Declaration of Human Rights (United Nations) was drafted by representatives with different legal and cultural backgrounds from all regions of the world. The Declaration was proclaimed as a common standard of achievements for all peoples and all nations. It sets out fundamental human rights to be universally protected, including work-related rights.

Work plays a critical role in the lives of everyone, and the successes enjoyed by all, and the fundamental problem to be solved by the human resources practitioner is how to ensure a healthy and thriving workplace where Companies objectives can be met and the principles of Article 23 of the Universal Declaration of Human Rights can be enjoyed by all workers.

Human Resources in the 21st Century

The Full Stack Human Resources professional aspired to in this manifesto is not defined by a static, pre-defined list of competencies. There are already numerous Human Resources professional bodies  (AHRI  | CIPD | CHRP | SHRM | etc.) and Companies (QLD Government | NSW Government | etc.) that publish such HR Competency Profiles that can be readily referenced. Instead, the Full Stack Human Resources professional simply has both sufficient breadth of experience and knowledge within the industry, and sufficient depth of skills across the relevant domain/s. This is the “T-shaped” approach that’s discussed by Tim Brown, CEO of IDEO (Wikipedia | CE Article) and the marriage of technology (depth) with liberal arts and humanities (breadth) discussed by Steve Jobs, ex-CEO of Apple (New Yorker). The challenge for the contemporary human resources practitioner is to develop a wide enough depth of skill that can be effectively deployed across the various workplace scenarios that require input, advice, collaboration, and direction.

The Full Stack Human Resources practitioner is a “generalising specialist”. This means that the full range of human resources domains are mastered, along with logic and problem solving skills, business skills and industry experience, technology skills, and leadership skills. The Full Stack Human Resources practitioner is subsequently able to draw on the pool of technical, human resources domain-related skills to collaboratively solve people-related problems, and identify people-related opportunities, across their Company’s operations. This is essential as the human resources function, and the fundamental problem, exist within the wicked domain (Sage | PDF) as they involve strong mismatches between information acquisition (learning) and its application (predictions and choices).

Full Stack in the human resources context is not the same as full stack in the software/IT context. In the IT space, full stack refers to a professional who is competent across a range of IT domains including both back-end and front-end development. The Full Stack Human Resources practitioner is different in that they are competent in the scope of the human resources domain, this is the depth element, whilst also being competent in a range of complimentary business and cultural domains, this is the breadth element. Whilst no two Full Stack Human Resources practitioners have the same background, an example may be: 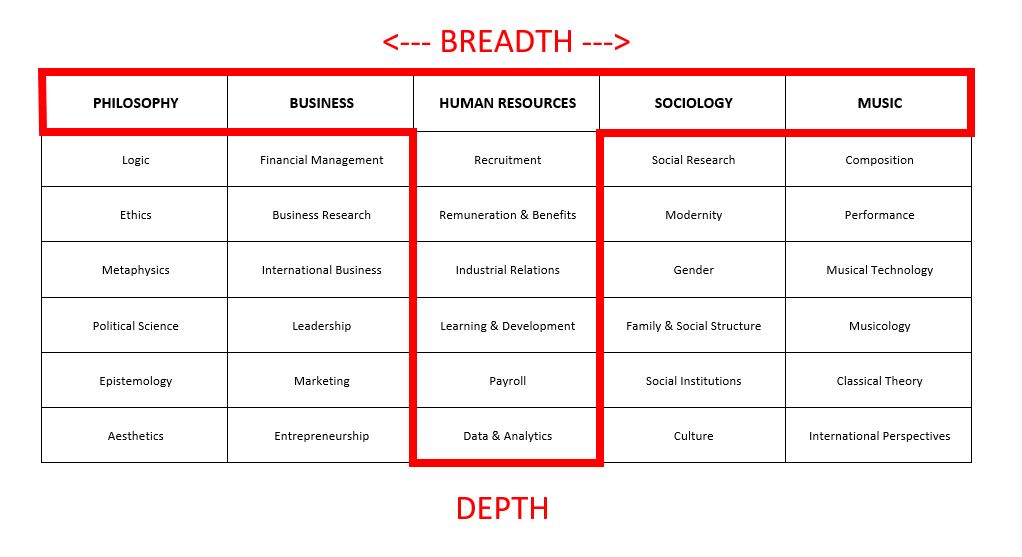 Full Stack is the rule, specialisation is the exception.

As broad a depth and breadth as possible is desired. Human resources specialisations will provide practitioners with learning and development opportunities that deepen their skills profile, however remaining in a specialisation for too long will narrow their depth.
2

Time spent in a specialisation should last only as long as necessary to achieve a reasonable depth of skills.

Once a practitioner has sufficiently mastered a skill or specialisation they ought to seek out opportunities for further skill and specialisation development.
3

Practitioners should seek out opportunities for complimentary study and development that are not strictly within the human resources domain.

Practitioners ought to engage in complimentary development activities whenever possible in order to broaden their experience and knowledge, and to develop the complimentary skills that are required to support creative workplace scenarios needing input, advice, collaboration, and direction. Lifelong learning is essential.
4

It takes time to become a Full Stack Human Resources practitioner and the best way to develop the breadth and depth required is to learn from others. Current practitioners share a responsibility to develop new and emerging talent in as broad a manner as possible.
5

Full Stack Human Resources practitioners shall strive to adhere to and promote an ethical practice framework at all times.

Ethical business practices will not only ensure a long and varied career for the practitioner, they are essential to solving the fundamental problem ensuring both the continued success of the company and the well-being of workers.

Practitioners shall study as widely as possible, and apply their knowledge through all types of work wherever they can (particularly voluntary work), to develop the breadth of knowledge and experience necessary to succeed as a Full Stack Human Resources practitioner.

Tell your network that you have read Simon’s Full Stack HR Manifesto and inspire them to do the same.