This has got to be the best drumming video I’ve ever seen from any ‘western’ music. Full stop! Maybe from any genre of music.

The band here is Tool (website). They’re from LA and have been a staple in the metal and alternative music scenes since the ’90’s. The cassette of their 1996 album Ænima (Wikipedia | Spotify) was continually being passed around at my high school and was always on rotation at parties back then. Admittedly I’ve not really listened to much Tool music in the last decade – I don’t even know if they’ve released much music in that time period – however I got on to their latest album Fear Inoculum (Wikipedia | Spotify) after reading a review in a guitar magazine. And what an album it is! I’ve had this album on repeat almost exclusively since this first listen. But rather than get in to a review of the album I’d like to share this HD video of the band’s drummer Danny Carey (Wikipedia) performing the song Pneuma off the album – before I do though, a note on the guitar.

The guitar piece is wonderful and most will recognise that it’s in the key of D minor. The intro in the piece is really nice and is a progression of Am, F, C, F, C (altered to include a D note), and Dm. This is a power chord progression in drop D tuning that looks as follows:

As these are power chords, and not ‘complete’ chords with three notes each, they are not technically adhering to the Dm key (e.g. the first power chord could equally imply an A major). However Dm is the key as we’ve got an F rather than an F# and a C rather than a C# which we’d see if the first chord was an A major. I particularly like how this starts on Am and works through the key to resolve on Dm for a full bar before repeating (the three tones in this chord are D, A, D so not technically a Dm as it’s missing the minor third or F note). I think of the fifth chord as a C (altered to include a D note), and not an F (altered to include a D note), as the progression descends from F to C to F then down a little further than the previous C hence thinking of this as a C with a D element (instead of the E note). No doubt there is a better more technically correct method to represent these two notes, but this is how I think it through.

But on to the drumming.

By simonives Simon Says No Comments

Over late 2020 and into early 2021 I built a new guitar for myself. I’m proud of this one, and it was even more of a challenge as I finished it off whilst moving house.

I started studying music and learning the guitar when I was 13 – my first year of high school, grade eight. I was obsessed with Nirvana and Kurt Cobain at the time, and heavily influenced by the grunge scene. Grade eight introduced me to the study of music for the first time, and the first term was focused on the guitar. I was hooked (even though we only learned a simple rendition of Ode to Joy on a classical guitar). About half-way through the year I was able to convince my parents to get me guitar lessons. I used to skate from school, Burnside State High School, into town on Wednesday afternoons for a lesson at 4:30pm. This worked out well as I could go and skate on this fun ledge behind the Nambour Civic Centre for an hour before guitar lessons. 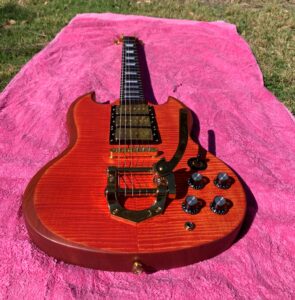 My guitar lessons were in the basement of Nambour Music World with who I thought was the ‘most rad’ guitar player around. My teacher’s name was Richard, he wore ripped jeans, and he had tight curly shoulder-length hair. And he played the coolest guitar I’d ever seen – a Tune-o-matic bridge Gibson SG. He gave off vibes of a grungy Slash. I was star struck. At the time I had a cheap nylon-string guitar that would stay in tune for all of three seconds. I was able to upgrade to a loan guitar from a friend of my aunty – a black Gibson Les Paul copy with a couple of humbuckers and an old Laney bass amplifier. The guitar looked the part however the action was incredibly high and the bridge assembly was rusted so it couldn’t be adjusted. At least I could thrash chords on that thing with no fear of fret buzz! 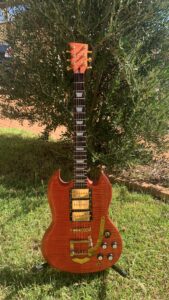 Since starting guitar lessons I’ve always wanted an SG. I needed some of that ‘coolness’ from Richard to rub off on me, and damn they sound so nice. And how funky is the neck warping pitch adjustment you can get with them! I never got around to purchasing an SG, I could never justify the cost for an amateur guitar player. The first guitar I purchased was a Fender Squire Stratocaster in metallic purple and a perloid pickguard paired with a Marshall 100 watt tube amp. So come 2020, a bit of spare time, and a new project idea. How about I build myself a replica SG with coolness dripping off everywhere. And that’s just what I did. I call this guitar the SG Richard. 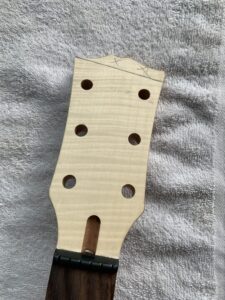 I originally went for a classic Gibson head-stock profile but changed to something a little more aggressive.

The guitar is modelled off a 1961 Gibson Les Paul SG Custom with three pickups. This was the first SG (Solid Guitar) released by Gibson and introduced the double cutaways along with a thinner profile and a mahogany body. When ordering an SG the customer could select whether they wanted humbuckers or P90s and a Tune-o-matic bridge assembly, wraparound bridge, or vibrato tailpiece. Gibson’s SG Standard is their best selling guitar of all time.

I’ve remained true to the original with a mahogany body and neck and I’ve got a bookend section of flame maple as a veneer on the front of the body and the front of the head-stock. I’ve kept a dark fretboard, using rosewood, and I’ve also stayed true to form with the trapezoid inlays. Where I really differ is I’ve used three humbucker-sized P90s from Tonerider in my build, the Rebel 90s, which are wired in a very different manner to the standard Les Paul wiring, and I’ve used a Bigsby-style tremolo system. The pickups are two neck P90s at 8.4k and one bridge P90 at 9.3k. All have Alnico 2 magnets. The wiring I’ve gone with allows these to be finely selected and blended to produce a range of wonderful tones.

I’ve also kept a black plastic nut in my build. I’m vegan so bone products are off-limits and I wanted to keep with the black aesthetic and not introduce a standalone white element. I’m also working on some custom tone and volume knobs to replace the standard silver Les Paul knobs that I’m using at present, and a custom truss rod cover – I just can’t land on a design I like though. 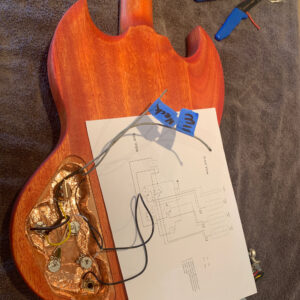 The neck is lovely. I’ve installed jumbo frets and the levelling outcome was great. I’ve gone for a traditional bevelled fret end rather than completely round end simply because I like the feel. Action’s set fairly low, lower than Gibson’s standard action. This is actually the lowest that I can go with the current bridge

I’ve gone with a burned orange all natural stain throughout. I used five coats of stain to get the colour depth and I’ve topped it off with three coats of a matte clear stain. I’ve lightly polished the head-stock and body, and I’ve left the back of the neck unpolished (I just like the feel of a more raw, unpolished neck). I’m really happy with how the ‘flames’ in the flame maple veneer pop. It looks great in both the sun and under an artificial light.

For the strings I’ve gone with the best I can get my hands on. I’ve strung the guitar with 10/48 gauge nickel wound Stringjoy signatures. These strings, made in Nashville, are great. They’ve got a different gauge profile that you’d ordinarily see on a set of 10’s and they play and feel fantastic. The gauge spread is: 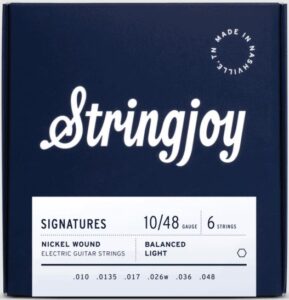 And throughout this build I also helped my youngest daughter build a Fender Telecaster-style guitar. It turned out great. Whenever she’s asked what it was like to build a guitar she says “there’s just so much sanding!” 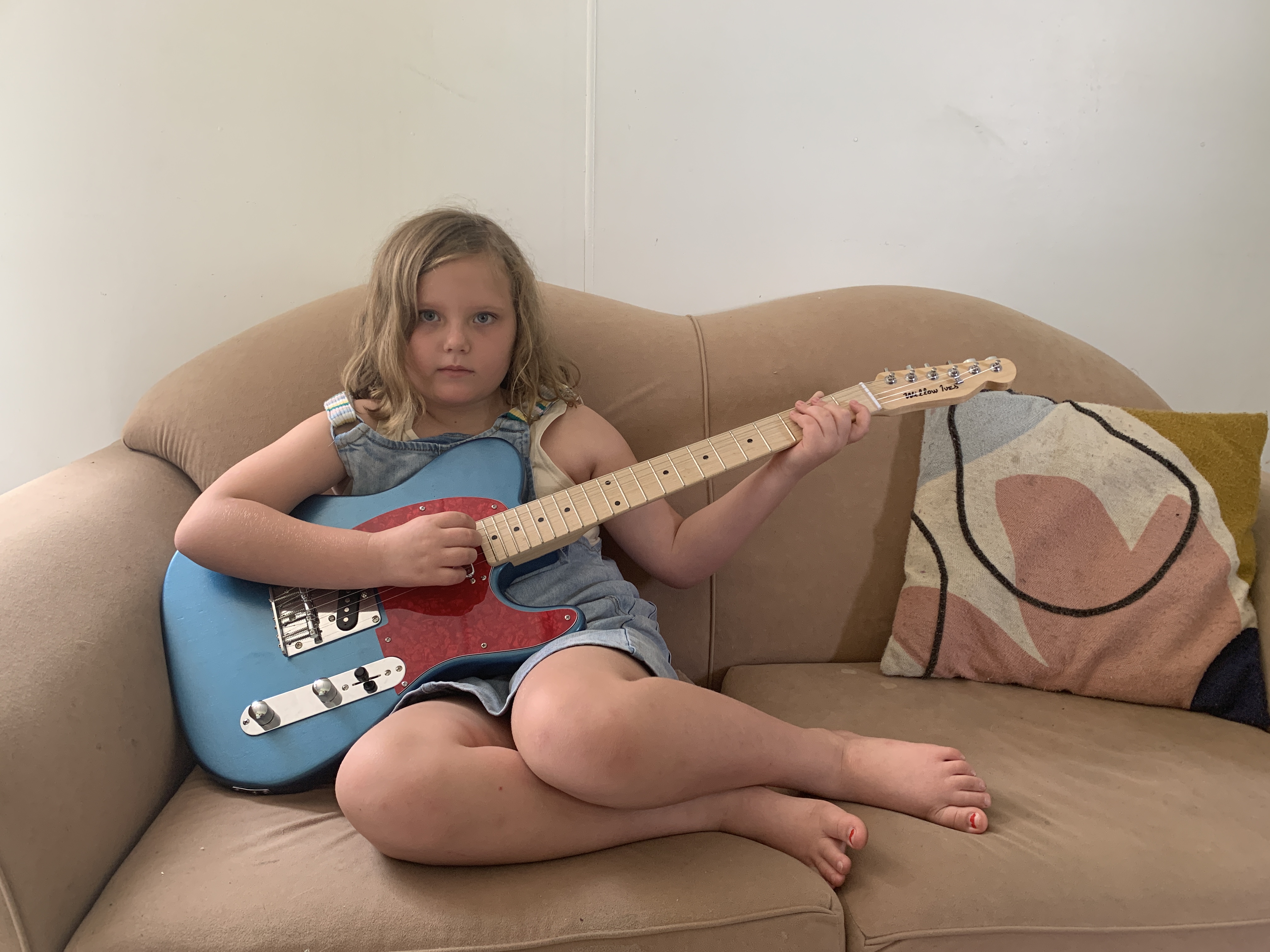 Willow’s Fender Telecaster-style build. Notice her name stencilled on the head-stock in a Fender font. 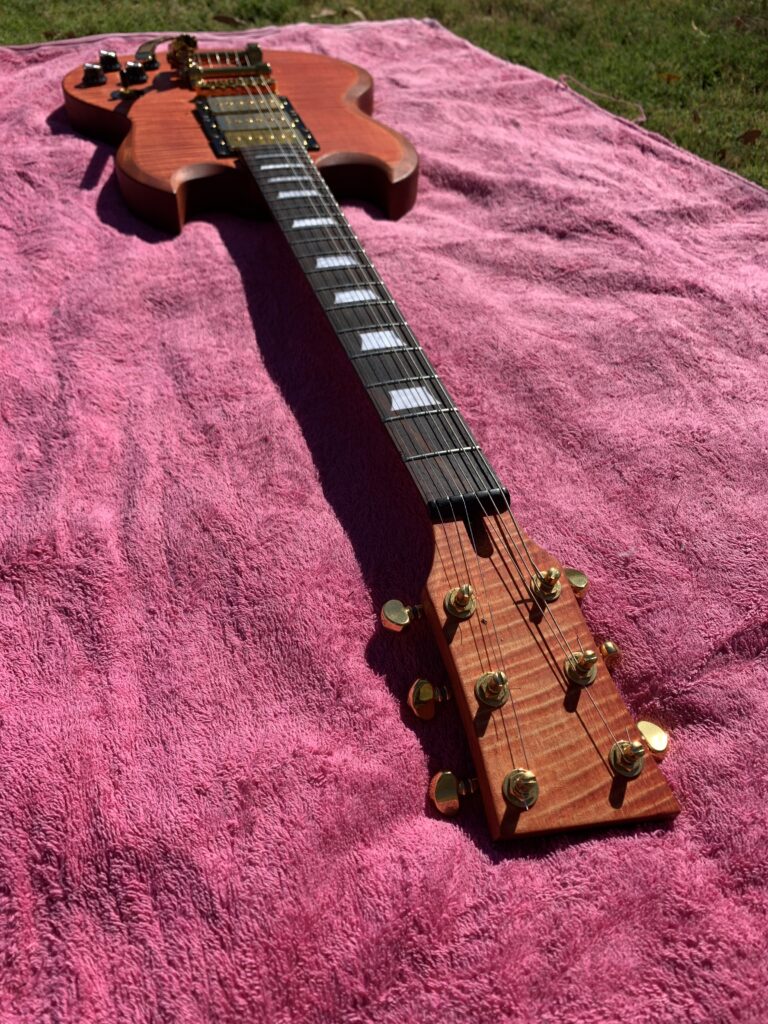 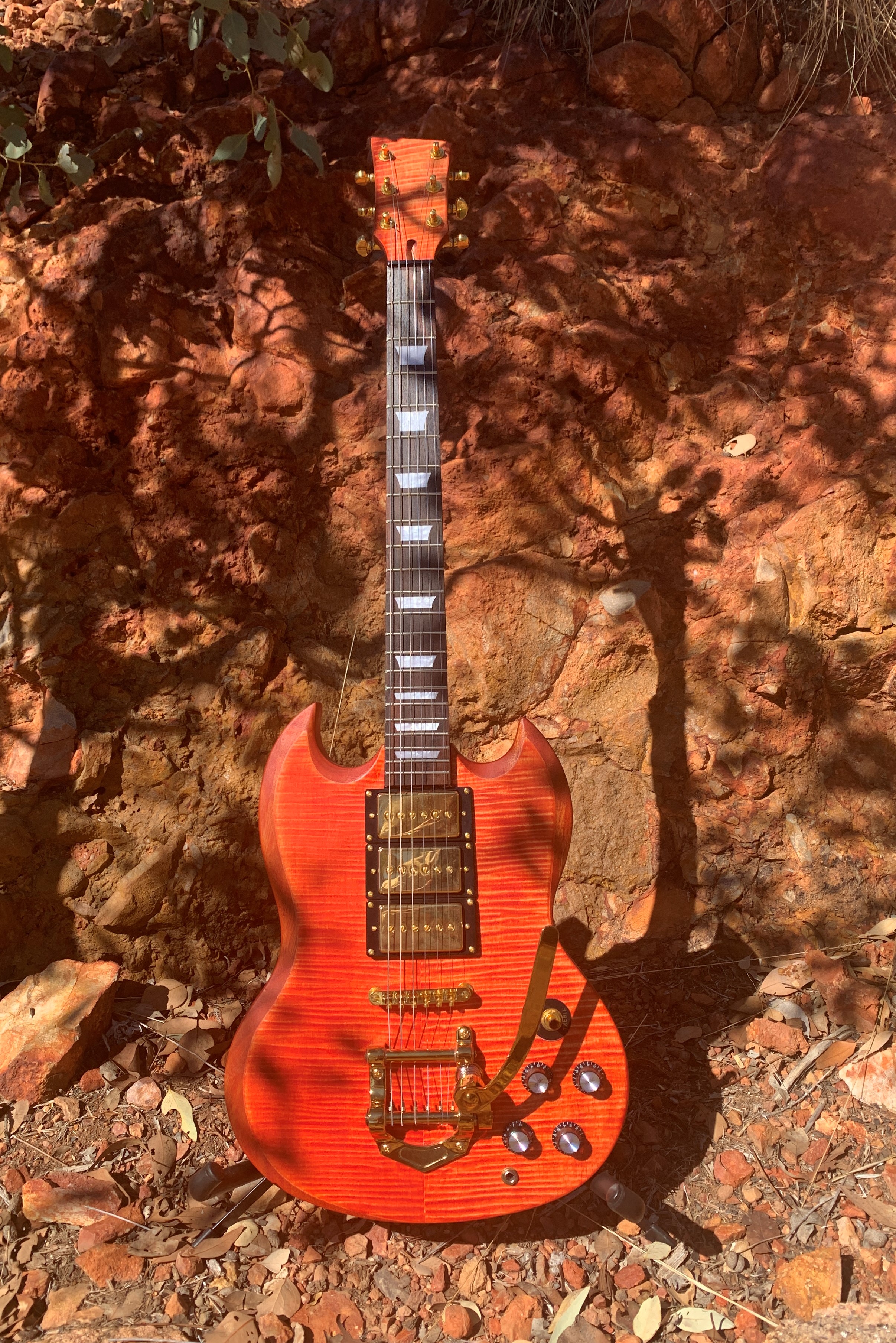